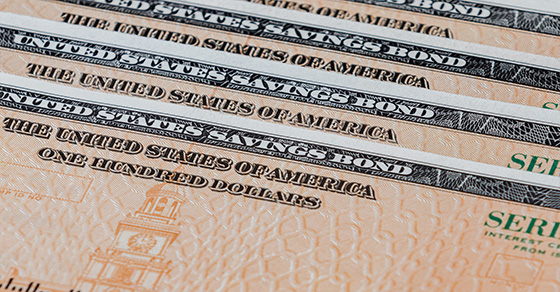 Many people have Series EE savings bonds that were purchased many years ago. Perhaps they were given to your children as gifts or maybe you bought them yourself and put them away in a file cabinet or safe deposit box. You may wonder: How is the interest you earn on EE bonds taxed? And if they reach final maturity, what action do you need to take to ensure there’s no loss of interest or unanticipated tax consequences?

Series EE Bonds dated May 2005, and after, earn a fixed rate of interest. Bonds purchased between May 1997 and April 30, 2005, earn a variable market-based rate of return.

Paper Series EE bonds were sold at half their face value. For example, if you own a $50 bond, you paid $25 for it. The bond isn’t worth its face value until it matures. (The U.S. Treasury Department no longer issues EE bonds in paper form.) Electronic Series EE Bonds are sold at face value and are worth their full value when available for redemption.

One of the main reasons for buying EE bonds is the fact that interest can build up without having to currently report or pay tax on it. Unfortunately, the law doesn’t allow for this tax-free buildup to continue indefinitely. When the bonds reach final maturity, they stop earning interest.

Series EE bonds issued in January 1990 reached final maturity after 30 years, in January 2020. That means that not only have they stopped earning interest, but all of the accrued and as yet untaxed interest is taxable in 2020.

If you own EE bonds (paper or electronic), check the issue dates on your bonds. If they’re no longer earning interest, you probably want to redeem them and put the money into something more profitable. Contact us if you have any questions about savings bond taxation, including Series HH and Series I bonds.